AN OVERVIEW OF MPNS

Myeloproliferative neoplasms (MPNs) are a closely related group of progressive blood cancers in which the bone marrow typically overproduces one of the mature blood elements. Other shared features include tendencies toward blood clotting/bleeding, organ enlargement, bone marrow scarring (fibrosis) and a possibility of transformation. Although MPNs can strike anyone at any age, most patients are afflicted in the sixth decade of life or later.

Stem cell transplants may offer a cure for some myelofibrosis sufferers. But there are no known cures for most MPNs. However, patients can experience few or no symptoms for extended periods of time and many people who suffer from MPNs can enjoy longevity with proper monitoring and treatment. The identification of the JAK2 gene marker in 2005 and the CALR gene marker in 2013 have led to significant advances in the diagnosis, understanding of disease processes and treatment of MPNs.

At MPN Research Foundation, we’re committed to funding researchers in their quest to treat and ultimately cure MPNs. But even more importantly, we’re committed to providing patients, their families and the entire MPN community with advocacy, education, and resources. Working together, we can change the prognosis and create a brighter future for people whose lives are affected by this group of diseases.

What are genetic mutations?

Many MPNs are characterized by the abnormal growth of white blood cells, red blood cells, and platelets – events that can be caused by genetic mutations.

In 2005, researchers discovered an important genetic mutation associated with the MPNs. Since then researchers have discovered additional mutations including the JAK2, CALR, TET2, and MPL gene markers.

The discovery of genetic mutations has led to significant developments in the treatment of MPNs. For example, in the wake of identifying the JAK2 mutation, researchers and physicians have been able to inhibit the JAK2 gene with a variety of compounds including a JAK inhibitor which has been approved by the FDA as well as other drugs still being tested in clinical trials.

Research is ongoing to identify and explain genetic underpinnings for the cause of the MPNs. At MPN Research Foundation, our commitment to funding leading-edge research in the area of MPN genetic mutations and gene therapies is just one of the ways that we drive improved patient outcomes and carry out our mission to work tirelessly to change the prognosis for MPN patients and their families.

Treatments for MPNs
If you or someone you care about has been diagnosed with an MPN, it’s important to know that blood cancer treatments have come a long way over the past decade, significantly improving the quality of life for MPN patients and their families. At MPN Research Foundation, we’re proud to fund research that is leading to advances in treatment and ultimately, a cure for myelofibrosis (MF), essential thrombocythemia (ET), and polycythemia vera (PV). But just as importantly, we’re committed to helping patients and their families understand MPN treatments as well as the novel therapies, clinical trials and emerging treatments that are shaping the way we approach MPNs going forward.

Available Treatments
There are a wide variety of treatments available for MPN sufferers based on the type of disease, the severity of symptoms and other variables:

Drug Reimbursements
Discover how to navigate drug reimbursements and the use of off-label prescriptions for blood cancer treatment.

How Prevalent Are MPNs?

If you or someone you love has been diagnosed with an MPN, it’s important to know that you’re not alone.

While incidence rates refer to the number of new patients diagnosed with an MPN each year, prevalence rates indicate the total number of patients living with an MPN at any given time. And with earlier diagnoses and better tracking, the numbers appear to be growing.

MPN Prevalence in the U.S.

Recently, researchers from the Mayo Clinic, Boston University School of Public Health and the pharmaceutical company Sanofi’s department of Global Evidence & Value Development, concluded a study of the prevalence of the myeloproliferative neoplasms in the U.S. Their findings were reported at the American Society of Hematology annual meeting in 2012 and in a recent scientific publication. 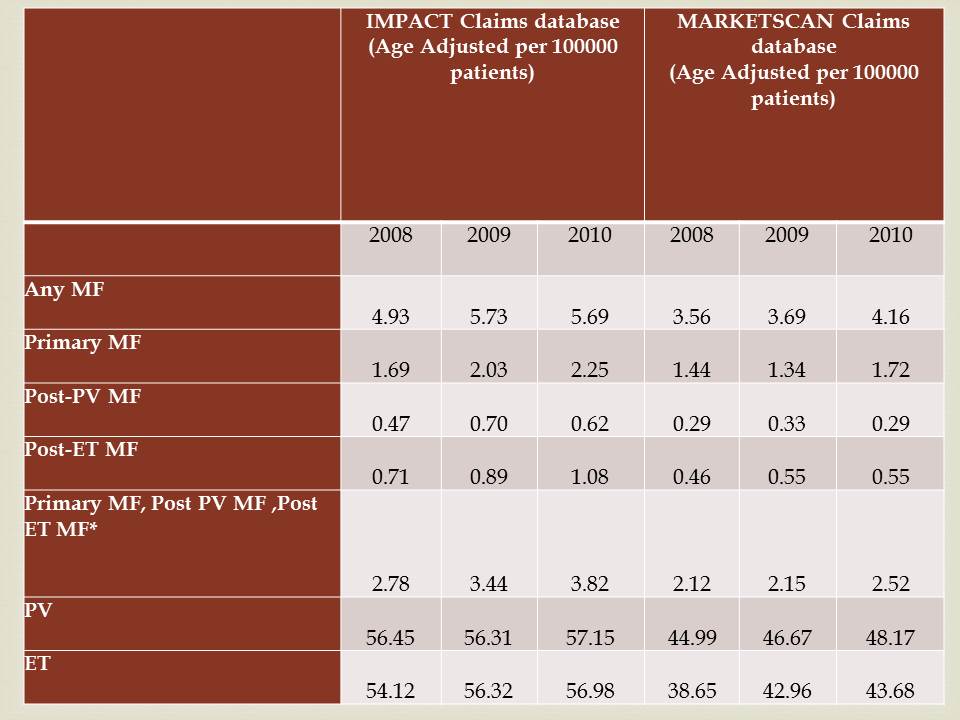 The study results suggest that MPN prevalence is much higher than previously reported.

MPN Prevalence Rates and You

For patients, the key takeaway from MPN prevalence rates is that you don’t have to walk through this difficult period of your life alone. Although reported MPN prevalence rates are increasing, it could be due to better tracking of these diseases as well as earlier diagnosis. The good news is that there is a vibrant MPN community comprised of researchers, healthcare practitioners and other patients on hand to provide information and emotional support.

At MPN Research Foundation, we’re proud to play an important role in the MPN community by supporting patients and families through research, advocacy and education. Working in tandem with the healthcare and research communities, we’re dedicated to changing your prognosis and helping you identify a path toward a brighter future.

THE ENVIRONMENT AND MPNS

Here is a collection of the known information about the exposure to chemicals and MPN:

News on the Polycythemia Vera cluster found in Pennsylvania

Get updates on new treatments, MPN research and patient stories.

Join our mission to accelerate research for better outcomes.